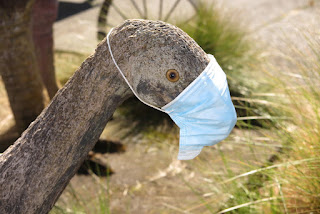 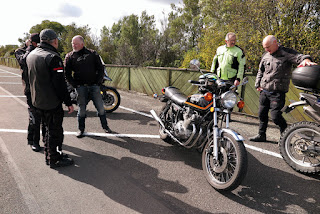 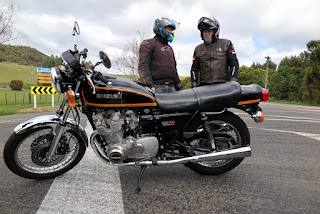 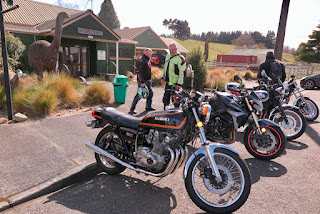 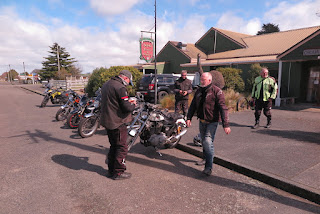 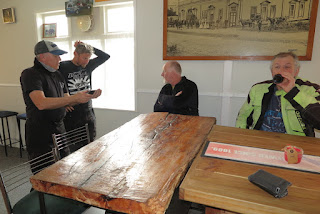 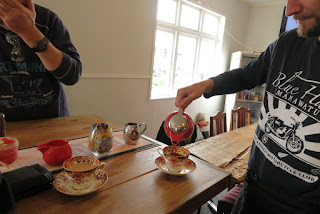 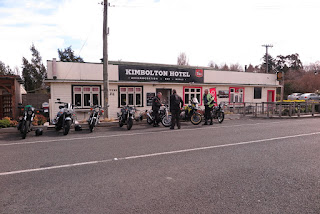 I can still remember the day I first saw a Suzuki GS750 in Palmerston North. It was a red single disk model and it was different in every way to the Suzuki two strokes we got around on. All of a sudden it made my T250 look so unrefined and along with the GS 400 Suzuki had begun the shift into the four stroke world. If the Motorcycle magazines tests we had been poring over with GS750 tests were to be believed this was the bike that not only had a wonderful motor, but it also handled well. Our first post Covid internment Mk 2 ride on Sunday saw a group of six of us line up at Memorial Park for a much needed Sunday morning ride and little did I know today I was going to satisfy my curiosity about what a GS750 was like to ride.

Our chosen route was the world famous Apiti loop and a stop at Apiti Tavern for a cuppa and something to drink. With Ian leading the way we headed out to Ashhurst and up the valley. The Raumai bridge signalled the beginning of the curves as we made our way through a lot of wonderfully familiar corners. It was great to get back out amongst the country smells, and spring colours of daffodils and blossoms with glimpses of lambs in the fields. Care needed to be taken with corners that were yet to be touched by sun and the odd loose metal around the place. The air became a little cooler as we climbed up the valley and made our way to our first stop at Totara Reserve where Gary left us to go and surf some gravel on his BMW 650/800.

We were soon back on the bikes heading to Apiti and we were still enjoying the chorus of countryside sights and smells. The final straights into Apiti invited a prolonged twisting of the throttle that soon had us sitting outside the tavern. The smell of something on the grill certainly activated the taste buds but much to our disappointment they didn't open until midday and that was thirty minutes away. So it was off to the Kimbolton to see if we could chance our luck with a cuppa and fed there. Bruce offered me a ride on his Suzuki GS 750 and I gladly accepted . Ian took the reins of the GSR and Bruce pushed the starter button on Ians W650.

It was a bit of a revelation. The GS was definitely not as refined as the GSR, but the suspension work Bruce has had done on it made for an extremely pleasant and sure footed ride. The sumptuous seat felt like you could ride around the South Island no problem. The motor ticked over nicely and as the revs rose it certainly got into its stride and proved very precise and steady through the twisties. The twin disks did a great job of slowing down the 500 plus pounds and it was with some disappointment the ride came to end as we parked up in Kimbolton.

The conversation around the table at the Hotel was very much around how we found our rides on each others bikes. The GS750 is definitely a very useable classic and one I would put in my garage any day. Sir Al also had a spin earlier in the ride and was also impressed. Bruce was pleasantly surprised at how well Ians W650 ran and I think Ian found the GSR more of an acquired taste. Most of the crew ordered Biker Burgers on the recommendation of our previous visits. Unfortunately they weren't up to the previous standard with the steak more like trying to chew a large piece of inner tube. Nga Boyz weren't impressed. However my Hawaiian Chicken burger was very passable but next time it will probably be a muffin or Pizza over the road at Hansens.

Oh well, at least we got to finally get out and about on our bikes and blow some cobwebs out. Being able to finally ride a Suzuki GS750 was a real treat. Thanks Bruce and the rest of the crew for a great post Covid ride.