We had a very interesting mix of bikes for our September EoMR. It was great to see Kim out on his H2 for the run and Max out with his lovely FZ 750. Roger brought out his little Moto Guzzi 350 whilst his little Benelli 2C is having some major internals replaced. Steven had his Cagiva Raptor out for a spin and Bruce A had his GS800 BMW along for a ride. Rich was doing the business with the Strom and Ray on his Trumpet and Sir Al on a Honda CB 500F demonstrator from work. I will hand over to Sir Al for the rest of the story.......... 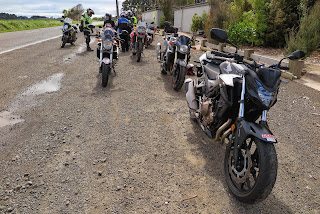 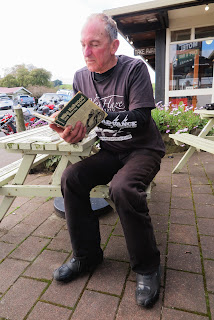 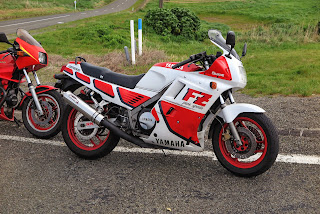 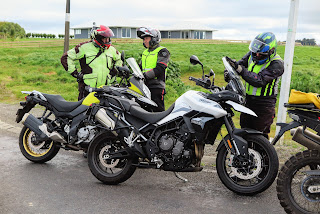 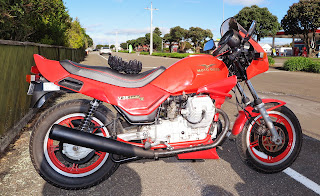 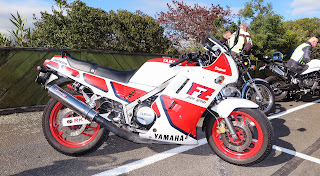 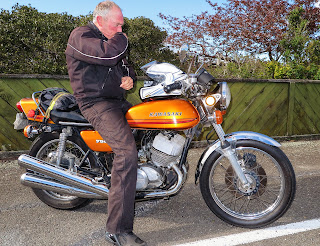 A few weeks back I decided to try out a bike I’ve been interested in for some time. So for our regular Sunday ride I borrowed a Honda CB500F from work. Now I’m normally riding an 02 Sportster S (essentially set up in Japan for track work) or my trusty old H2. So a 477cc parallel twin is a significant step down in cubic capacity. But it’s also a significant drop in weight (especially over the Sporty). I was quite sure I would find this bike lacking and that I couldn’t possibly like it? How would it compare to the effortless torque of a hotted-up 1200 V-Twin or the power delivery of a 750 triple 2-stroke. And learner-legal at that. A doubter I was and a Hater I was ready to be! 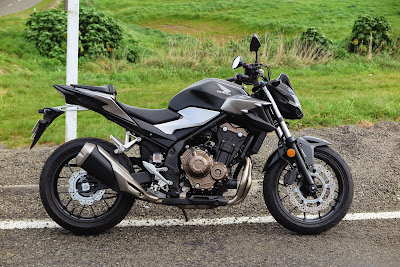 I rode the bike home on Saturday afternoon from work and the first thing I noted was how easy it was to ride around town. Ergos are great and there’s plenty of power available to keep ahead of the traffic. Maybe this was the bikes forte; it’s a commuter. The next thing I noticed was pushing the bike around in the garage. No pre-pushing muscle warm up required. It’s well balanced and easy to move.

We headed around to Feilding and Makino Road and up onto the Vinegar Hill road. I was surprised at the acceleration generated by that little Twin and also that the engine had sufficient torque to hold 6th gear (up and down hill) and to pass traffic in 6th. Must have misread the specs. The Hill road is a good quality B road with fast sections and tight sections. I was leading and found I was really enjoying the ride and handling and the bike's ability to dig deep and pull out of corners without chasing the redline was a revelation. I was expecting to be passed but wasn’t until near the end of the road when Kim (H2) and (Mad?) Max (FZ750) went past racing. We weren’t too many corners from the main road (SH1) and apparently Max made his pass a couple of corners before the Give Way sign, not realising some speed would need brushing off! The braking manoeuvre was interesting to watch, I’ve heard. I did wonder what the black lines were heading into the intersection. One of the good things offered on all new bikes is ABS. On the Honda it’s a 2-channel system. I wonder if it can be retro-fitted to an FZ. 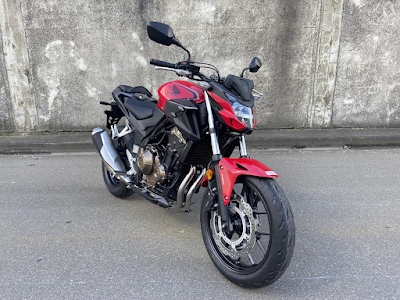 We stopped at the only place open in town for coffee. Won’t stop there again! Rather head back to Feilding. Faulty Towers springs to mind!

A small feature appreciated on the F was under-seat storage. Somewhere to put the wallet, phone and hat. Another interesting feature was an average economy read-out on the display. And I was pleasantly surprised to read 3.5 / 100 km. That’s 80.7 MPG in old money, or 28.6 km/litre. That’s cheap to run! 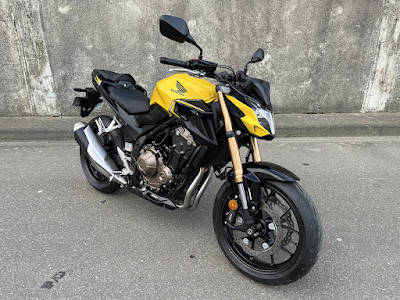 We turned toward home taking various back roads which I thought might be a better test of the Honda. Handling, balance and comfort were superb. If I were to fault it I think the front end could be a bit better planted - but then this particular bike is a 2021 model and has RWU forks with single disc. The 2022 model now has USD 41mm Showa SSF-BP forks with a twin disc setup (borrowed from the CB650). Honda have also moved the weight forward by a few degrees, and this combined Pilot Road 5 tyres has significantly improved the front end by all accounts.

On the way back I swapped with Gazza to see what he thought. He was also very pleasantly surprised with the 500 (and that's coming off a GSR750). Bruce A also swapped bikes for a ride. He felt he missed the extra punch of his BMW 700, which I understand. What I noticed was the huge increase in wind noise with the screen on the BMW. I’d forgotten what that was like. I found the 500 very stable in cross-wind, which I didn’t expect would be the case. Especially coming off the Sportster. I was very pleasantly surprised at the seat comfort - I’d call it all day comfortable.

The bike went back Monday morning. I have to admit I was sad to hand it back. How can a learner legal 500 twin be such a great all round machine? Would I buy one? YES.

Posted by Gazza at 10:27 PM
Email ThisBlogThis!Share to TwitterShare to FacebookShare to Pinterest